Q: What effects will window film have on my indoor plants?

A: Solar film blocks ultraviolet rays which does not have any negative effect on the natural growth of plants. Plants require chlorophyll which comes from the absorption of the visible light where it converts the light to energy (food). With Solar film you are merely filtering the direct light, removing the harmful UV rays, and leaving behind the light spectrum for plant/vegetation growth.

Q: Do all window films have a metallic shine to them? I live in a strata where we are not permitted to change the exterior appearance of our windows – what options are available to me?

A: 3M™ Prestige series is an ideal solution for those in strata properties. Our Prestige 70 is optically clear, provides 22% glare reduction, rejects 50% of the total solar energy and has an interior & exterior visible light reflection of 9%. What does this all mean? It means that there is no noticeable change between you or your neighbors – except for the fact that you are reaping the rewards of keeping cool during the summer and warm during the winter.

A: The leading cause of glass breakage is caused by stress

Tensile Stress - from the weight of the glass itself.

Twisting Stress - from building or window frame sagging or settling.

The first type, thermal stress, is the only one which film may affect. The use of window films will increase the thermal stress on sunlit glass. However, there are also other factors which will increase thermal stress such as: partial shading of windows from overhangs, tightly fitting drapes or blinds, signs or decals on windows, heating and cooling vents directed at glass. In addition, different types of glass (annealed versus tempered, clear versus tinted) have different solar absorption rates and will withstand different degrees of thermal stress.

Q: Is there a window film that will give me day & night privacy while still allowing me to see through it?

A: Metallic reflection is what creates Daytime privacy otherwise known as the One-way mirror effect. When a metallic film is installed on exterior facing glass and the sun shines on it the mirror effect occurs. This allows the people on the inside to see out but the people outside unable to see in. When the roles are reversed and it is dark outside but lit inside, those outside will be able to see in and those inside will see a reflection of themselves.

There is no film on the market today that will allow for clear visibility through the interior side of the glass during both the day and night.

Q: Will security film stop my window from breaking?

A: No – 3M™ Safety & Security Window Films make glass harder to penetrate and holds shattered pieces in place, helping keep both people and property safe from dangers posed by intruders, severe weather and broken glass. For an even higher level of protection, the 3M™ Impact Protection Attachment System securely fixes the filmed window to the frame, turning your window into a robust shield capable of withstanding forced entry, earthquakes and even bomb blasts.

Q: How do I stop fading

A: Fading is caused by Solar Heat, UV Rays (Both UVA & UVB), visible light. To reduce fading, you need to block the exposure. The best solution is to do this by using Solar Films. Solar Films not only block 99.9% of the harsh UV rays but can also block up to 79% of the total solar energy. 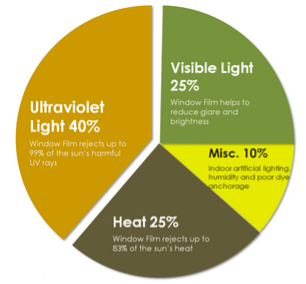 Q: What are the benefits of applying window film?

A: Window films are a type of window treatment applied to windows and glass surfaces, designed to reduce the amount of solar heat transmitted through the glass and increase safety and security. The films help increase solar reflectivity, reject solar heat, and reduce incoming ultraviolet light, resulting in a wide range of benefits:

All of this can be achieved with one film!

3M Window Films reject up to 79% of the suns heat to help keep rooms at more even, moderate temperatures.

Q: How do I care for my window film after install?

A:  A simple solution of ½ oz liquid dish soap to 1 quart of water in a spray bottle is all that is need to clean your window film. IMPORTANT: Avoid using alcohol and ammonia-based cleaners

Contact us today to arrange your
free in-home consultation

Fill out the form below with your name, email and the details of your prospective project, and we will get back to you with a quote as soon as we can!

We look forward to working with you to provide you with a strategic partnership. We are a company with the resources and the reliability you need to get the job done efficiently, effectively and economically. Call us and talk to an AMPCO expert today.